A “Sensory Officer” Who Makes Dairy as Delicious as Possible

Kait Rauen puts her science background and devotion to delicious food to the test as a Chief Sensory Officer, testing products with consumers to ensure they’re as tasty and delightful as they can possibly be.

THIS SENSORY SCIENTIST CAN GUARANTEE YOU ENJOY YOUR NEXT SNACK

KAIT RAUEN PASSES FOOD SAMPLES THROUGH A BOOTH WINDOW TO A TASTE PANELIST DURING A CONSUMER TASTE PANEL. | PHOTO COURTESY OF SCHREIBER FOODS

MA trip to the grocery store is a gauntlet of choices, with new items and products vying for your attention. So you take a leap and buy something new -- say a type of cheese you’ve never seen. (Try anything once, right?) Then, at home, the real test: did this food live up to your expectations? Sensory scientist Kait Rauen has the challenging task of ensuring you’re satisfied with dairy products ranging from the coldest ice cream to shelf-stable ghee.

About that cheese you bought. The chefs and scientists could have made a masterpiece. The advertising could have hit you right in the sweet spot. But for some reason, you just don’t like it -- as they say, there’s no accounting for taste. Or is there? Rauen -- Sensory Manager at Schreiber Foods, a global provider of dairy products -- is one of a growing field of researchers who aim to do just that by bridging the expectation and execution of a new or changing food product.

“Sensory science is a combination of psychology plus understanding what consumers like and dislike, and taking that and relating it back to food composition,” says Rauen. “It’s combining that psychological grey science with analytical black and white.”

Maybe an existing yogurt is introducing a new flavor. Maybe a classic ice cream brand is in search of a lower-fat remix. Maybe a new flavored milk is slowly coming together. Rauen’s job is to make sure that the chemistry and composition that goes on behind the scenes matches up to what the consumer actually enjoys at the end of the process. She bridges the people creating the product with the people consuming it.

“There’s times when our product development scientists are dead set that a certain product is going to be a success. And I, sometimes, am that ‘Womp womp womp’ person standing on the other side of the room, saying that consumers aren’t going to like it because of X, Y, and Z. And nine times out of 10 they end up saying ‘We should have just listened to you, Kait.’ ” 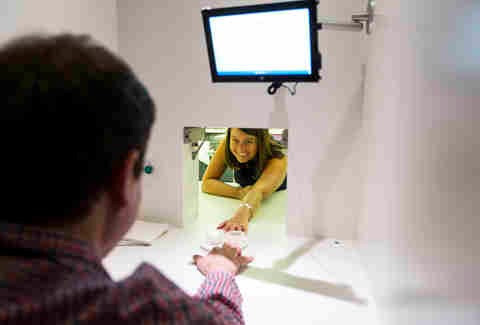 A TASTE PANELIST RECEIVES SAMPLES. EVALUATION DATA WILL BE ENTERED BY THE SENSORY TEAM INTO A SENSORY SOFTWARE SYSTEM CALLED COMPUSENSE. | PHOTO COURTESY OF SCHREIBER FOODS

What makes Rauen so good at her job? Yes, she’s a diehard chemistry geek with the periodic table on her shower curtain at home. But as a sensory scientist, she also values the intense panel testing that needs to happen with both expert and amateur tasters to find a common translation of an appealing product. That intensity requires a next-level devotion that’s just not possible if you don’t enjoy the hunt for flavor cues that can occur at a hundred points between the pasture and the supermarket.

Her enthusiasm has paid off. Even for a newer discipline, Rauen is on the younger end of sensory scientists. She started early; after one year of school internship and one year working as a chemist, she had the opportunity to go down to study at North Carolina State with Dr. Maryanne Drake, whom Rauen calls “the sensory dairy god of the industry.” At Schreiber, Rauen applied what she learned to create a sensory science department of her own. As she humbly puts it: “They were crazy enough to give a 24-year-old the opportunity to launch this program.” Eleven years later, it has definitely paid off.

Picking up on what’s wrong

The other unlikely asset that she brings to her work? She’s a really picky eater. “My family was shocked when I entered this field,” she says. “My mom and dad are still confused. And I’ve become even pickier working in the field that I’m in! My husband will make fun of me on a regular basis when we’re out to eat.”

While that pickiness has rendered her an expert on what’s wrong with a product -- and what to beware of among the larger population -- her refined tastes can only inform her professionally, not guide her.

“My opinion should not play a piece in evaluating a product. It’s opened a lot of doors to taste things I never would have tasted before, and to experience flavors that I normally would have been turned off by or afraid of,” she says.

When a product has an off taste -- even if it’s something commonly thought of as “good” that doesn’t belong in this particular case, like a pineapple note in a dairy product -- her expertise and enthusiasm come into play. “I get super excited because I understand the chemistry that’s going on inside the product to produce those notes.” And knowing where the problem is saves a ton of time fixing it.

Peeling back the onion

The first steps involve Schreiber’s scientists analyzing the less-obvious flavors. “We have a lot of expert eval testers who are doing the nitty gritty," says Rauen. “Certain products can have a floral note, or you can have a green earthy note, or you could have a creamy candy note.”

Those flavors can come from all sorts of places along the development from milk to product -- even the diet of the cows themselves. Peeling back the figurative onion sometimes reveals a literal one. Napoleon Dynamite called it years ago: “If a cow were to eat an onion, or garlic, you can pick that up in the milk” says Rauen. “The big thing to note about dairy products is that it always goes back to the source. What cows eat -- if they’re free range, or fed a certain diet -- that impacts how the milk tastes.” 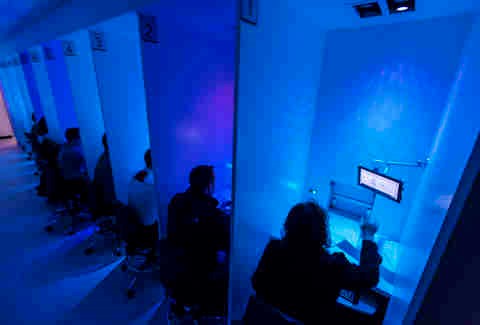 Unlike a marketing panel, sensory science test subjects are treated very clinically. Tasters’ reactions are meant to guide Rauen and her peers to concrete reasons for the food’s flavor profile, rather than be taken as one person’s opinion about whether a food is appealing.

“Sensory is not an inconsiderate science -- you have to take into account everyone around you, smells, tastes, all of that stuff. It isn’t just us throwing something at a consumer and saying ‘Here you go, try this,’” says Rauen.

To achieve this, her research area has a lot of high-tech measures to isolate the food from outside influence. The room is reinforced by positive air pressure, so that anything being cooked elsewhere in the lab won’t waft into someone’s nostrils via the tasting room’s A/C vents.

Tasters also follow strict rules to make sure they’re not sabotaging their own senses. Each person is limited in the number of items they can taste to ensure that their palette doesn’t get exhausted from flavors, and given breaks to let their taste buds reset. Especially aromatic items must be kept in the mouth for a certain number of seconds (or even a full minute) to maximize the role of scent in taste. Or other items might showcase tongue-centric flavors -- in which case the testers are asked to plug their noses while they eat.

The lights may even be turned to a certain color so that food appearance doesn’t affect how a person thinks it tastes. Even if the subjects know they’re only testing for flavor, the experiment has to account for this potential bias: “Unlike our children at home, who will scream bloody murder over what a product looks like, we as adults do it subconsciously,” she says.

That candor from the peanut gallery can make her job fun and easy, as kids don’t overthink what they want to say in a taste test, and they don’t pull their punches as a courtesy to the hosts observing them.

“They are the most honest, the most brutal,” she says, “but it’s the most enjoyable experience to hear what kids have to say.”

One experiment was creating root-beer-flavored dairy products as a healthy alternative to a dessert that kids enjoy. “As an adult you go, ‘What the heck? This is gonna fail.’ I was totally proven wrong by these kids, who absolutely loved it, and I was just blown away.”

If Rauen and her team can successfully introduce a new ingredient that’s healthier or more sustainable to an existing product, the best success they can hope for is that you never knew they’ve done any work at all.

Once the product has been refined to expectations, the final test is to determine whether a product with a new ingredient or recipe can actually pass the critical taste buds of the public. The test itself is simple -- the subject is given three samples of a product -- two of them with the new or old ingredient, and one with the opposite. The subject just has to identify which of the three versions is the different one.

“It’s a lot of fun to see people who are so determined that they picked the odd sample -- and then to find out they didn’t get it. It’s actually the one test that we want them to fail.”