Then to Now: The Progress of School Nutrition | U.S. Dairy

Then to Now: The Progress of School Nutrition

“Ideally, a school lunch consists of one nourishing main dish, a glass or two of milk, fruit or vegetable in some form, bread and butter or a sandwich, and a simple dessert.”

Let’s explore how school nutrition has progressed over time, but still remains the same at its core: an avenue to nourish our children so they can grow up to be healthy and productive citizens.

THEN: In the 1940s, one-third of men were rejected for military duty since they were not physically fit.  It was discovered that their physical deficiencies were related to being malnourished as a child. At the time there was no nutrition safety net to help ensure children were well-nourished. As a measure of national security, President Harry Truman signed the National School Lunch Act in 1946 to help safeguard children’s health. 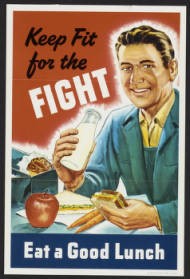 NOW:  Decades have passed; however, food insecurity among children still remains a challenge along with the growing concern of overweight and obesity. As you likely know, food insecurity can co-exist among those who are overweight or obese. It has been found that 79 percent of food insecure households try to cope with this situation by purchasing inexpensive foods, some of which are unhealthy options for their families. This strategy has known risks for negative effects on one’s heath.

School meals have had to adapt to this changing nutrition environment. Today, not only do school meals help fill the nutrition gap, but also serve as a teaching mechanism to show children how to build healthy lifelong eating habits. 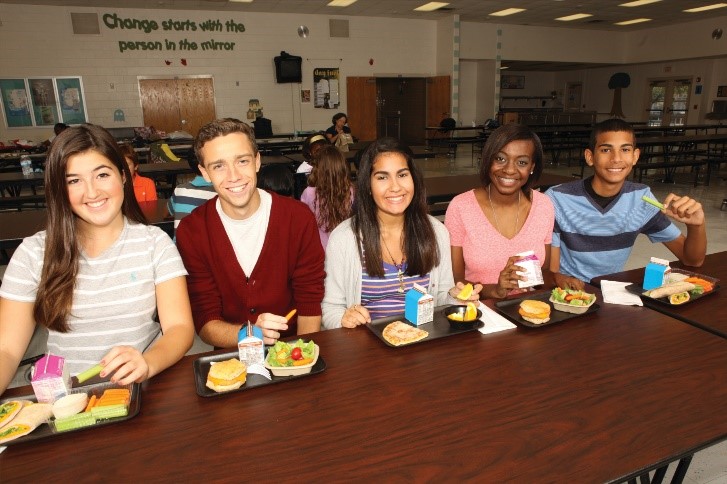 THEN: At first, school lunch was the only option offered. Gradually, the options made available started to increase. In 1954, the Special Milk Program rolled out, which provided a half-pint (8 ounces) of nutrient-rich milk to children daily.

As a response to the war on poverty, the Child Nutrition Act (CNA) was passed in 1966. Not only did this Act incorporate the school lunch and milk programs, but also authorized a pilot for the School Breakfast Program. Expansion to the CNA continued in the 1970s, which included the Summer Food Service Program to help address the nutrition gap when kids were not in school in the summer.

The fall of 1994 brought an enhancement to the quality of foods being served in schools via the Healthy Meals for Healthy Americans Act. This Act required that school meals align with the Dietary Guidelines for Americans (DGAs).

NOW: Today, the federal school nutrition programs offer children options for all meals (breakfast, lunch and supper) along with programs for afterschool snacks and summer feeding. Not only are there more feeding options available, but also improvement of the quality of the food. In addition to meeting the DGAs, the Healthy Hunger Free Kids Act of 2010 helped to increase the options for fruits, vegetables, whole grains and low-fat or fat-free dairy foods. 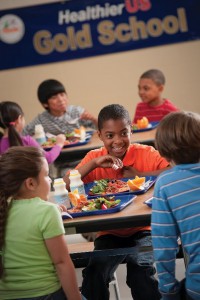 Photo courtesy of US Department of Agriculture

THEN: Milk served in schools preceded the federally subsidized meals programs. In the early days of school nutrition, the options for dairy foods were more limited. Cheese and a half pint (8 ounces) of white milk were the main choices. Believe it or not, a half-pint (8 ounces) of milk only cost one cent (on average). That is a lot of nutrition packed into a penny. The calcium, protein and other essential nutrients found in milk helped provide malnourished children with the nutrition their growing bodies greatly needed.

NOW: Today, milk continues to be a core component of the school nutrition program, which is key to children’s overall nutrition. Like most food groups, dairy foods are still under-consumed by school-aged children. If milk was not part of the school lunch, children could fall short of their daily calcium, phosphorus and potassium needs.

In addition to the half pint of milk of yesteryear, there are now more dairy food options available, including flavored milk, Greek-style yogurt and a variety of cheeses. Flavored milk has seen its own transformation. In 2013, the average serving of flavored milk contained 44 fewer calories and 30 percent less sugar that it did in 2007. It is recognized that flavored milk helps to increase milk consumption in children. Pediatrician Dr. Robert Murray said it well: “A little sugar for a bundle of nutrients is a good trade.” 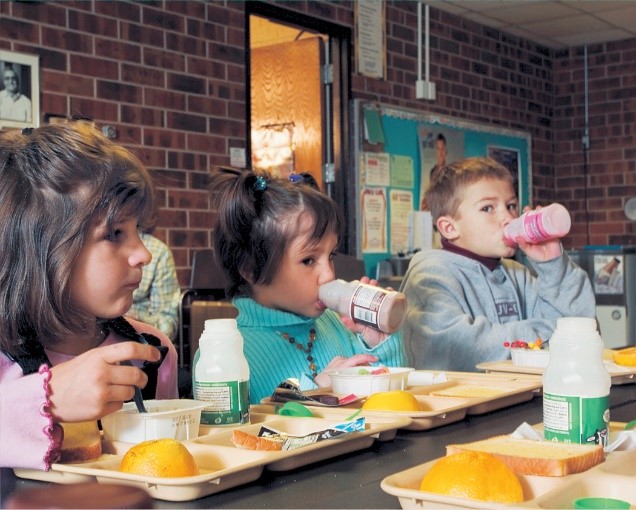 As with anything, school nutrition has undergone many changes and improvements over the course of 75 years. Through it all, milk has remained an integral part of the program. The goals of school nutrition and milk run parallel. Both have been and will continue to be an avenue for wholesome nutrition to growing children.

The Story of Milk in Schools