How Dairy Farmers Keep Cows Cool in the Hottest Weather

Cows like it cool. Research confirms what dairy farmers have known for years – cows are most comfortable (and generally produce the most milk) when it is a cool, crisp 40 to 65 degrees. As there are very few places in the world that maintain such a moderate temperature year round, keeping cows cool and comfortable has been at the top of farmers’ minds for generations. This can present a challenge for those farms located in warm weather locations so farmers find lots of innovative ways to help cows chill out. 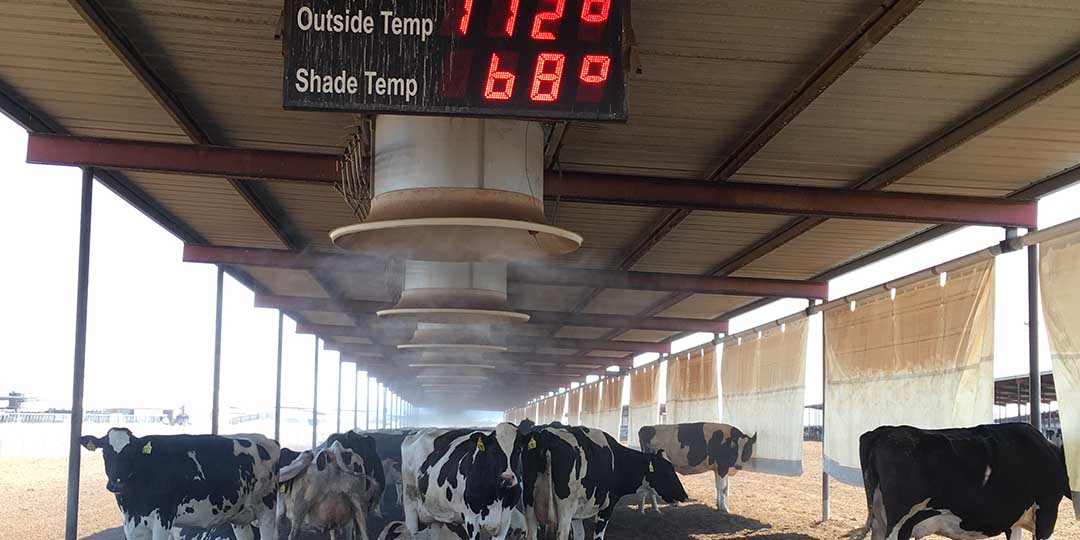 Arizona Cows the Picture of Contentment

Arizona dairy farmer Jen Millican shared a photo of her cows recently that drew some disbelief from friends. It showed her cows comfortably gathered in the shade beneath a digital thermometer readout of 68 degrees. Good thing, too – the thermometer also noted the outside air that day was 112 degrees.

“I sent that photo to a lot of people. They said their house doesn’t even get that cold,” Millican said. “They asked if they could come hang out in the cow pen.”

Millican’s farm sits about a half hour west of Phoenix and managing extreme summer heat takes on an added priority for the family.

Because of these excessive temperatures, most farmers get an early start during the summer, usually heading to work around 4:30 a.m.

“We’re trying to get everything done before it hits triple digits,” she said. “It was 109 degrees by 10 o’clock this morning.”

Millican has technology to thank for making life comfortable for her cows. Her family invested in a Korral Kool system that features a series of computerized fan-like structures mounted from the ceiling of the cow pens. They produce a downward thrust of cool air on the cows while releasing drops of water onto their backs, which creates an evaporative cooling process. Millican said it’s commonly 30 to 40 degrees cooler in the pens as a result.

In addition, the pens have large shades that automatically raise or lower at different times throughout the day as the sun’s position changes. This technology makes for more content cows and has been worth the investment, she said.

“I’ve heard my dad talk about the challenges he used to face with the heat,” Millican said. “This technology has definitely been a game-changer.”

At the Bennink’s farm, six tunnel-shaped barns provide his cows with the closest thing to air-conditioning. This is a necessity given Bennink must counter a subtropical climate that brings hot, humid summers and mild winters.

The barns, which measure 400 to 900 feet long, are equipped with 60 thermostat-controlled fans stacked on one end that blow air outside of the buildings, creating a vacuum-like effect. The result? Air moves through the barns at speeds of up to 12 mph, which drops temperatures by about 15 degrees.

“We were convinced right away this was right for the cows,” Bennink said. “You could see immediately they were more comfortable. Even we can walk in there and feel the difference.”

The tunnel barns use a system of misters above the cows’ heads that release a fine spray of water that – when combined with the breeze – creates an evaporative effect that lowers the animals’ body temperature.

“A cow gives off a massive amount of heat,” Bennink said. “She’s like a big furnace that requires a lot of energy to get the nutrients from her feed, which produces heat. It’s a challenge to get rid of her body heat but we’re able to manage it.”

While his cows love the cool breeze, it doesn’t mean Bennink is done exploring other ways to tame the heat.

“We constantly look at what we can come up with ourselves and we also work with engineers,” he said. “We look at things like cooling their beds or if we had the air going through ice, would it cool it that much more? We’re always open to new ideas because the cows treat you like you treat them.” 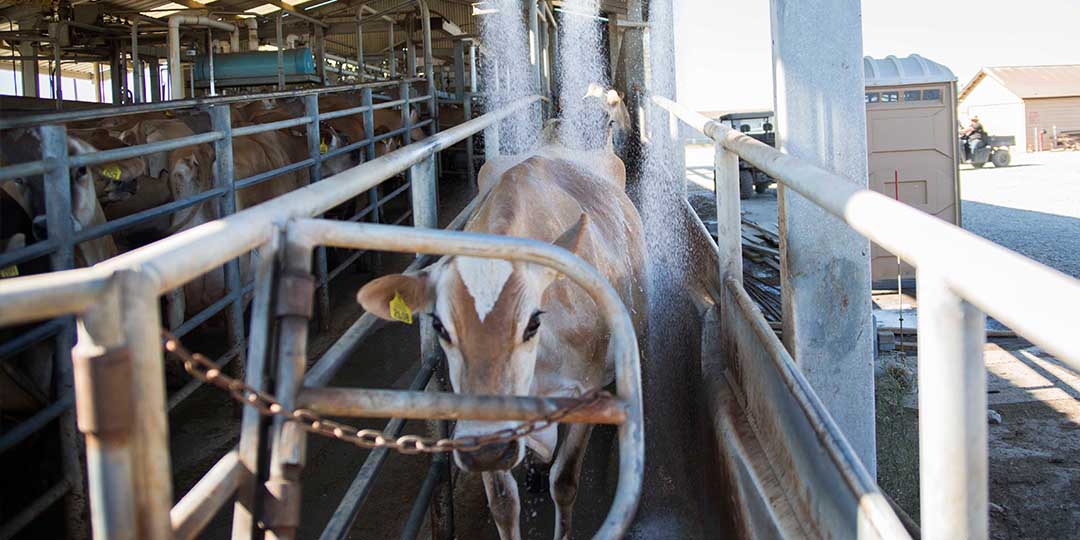 Kevin Blount has vivid memories of the 2006 North American heat wave that had a devastating impact on his Central California town of Turlock.

Temperatures reached 111 degrees for three days, which resulted in 10 of Blount’s cows succumbing to the extreme conditions. Blount vowed to do whatever it took to prevent a loss such as this from happening again.

“At that time, we set a goal and a vision because I said we would not go through that again. We needed to do more,” Blount said.

He invested in two new barns, and remodeled an existing barn and other facilities with a focus on increased cow comfort measures. His barns now include 70 fans that are 52 inches in diameter. They turn on automatically when the temperature surpasses 72 degrees.

He also installed a system of “soakers” that release a spritz of water on cows’ backs as they move about. The soakers are on a timer, run for a minute and a half and then shut off for two minutes before coming on again.

“The air flow keeps the cows cool when they are wet,” Blount said. “It’s like jumping in a swimming pool and getting out when it’s windy. You’ll get cool real quickly. Same thing with the cows.”

Blount is confident his improvements will stand the test of extreme weather conditions, should they occur. The well-being of his cows remains priority No. 1. 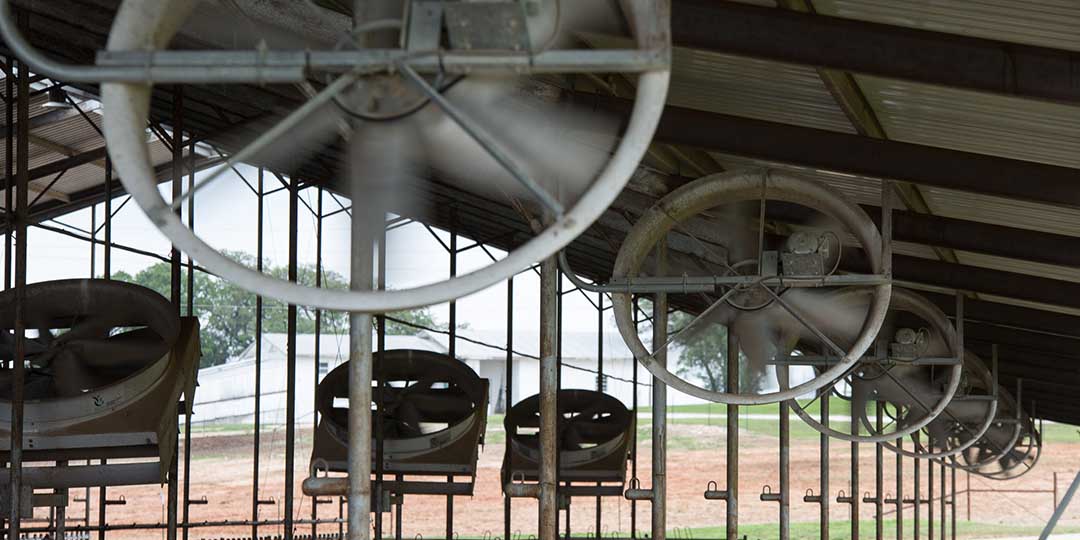 Fraze invested in barn updates that further enhanced cow comfort – a necessity given that weeks of 100-degree weather in his town of Comanche can be the norm.

For starters, Fraze installed a series of Cyclone fans in his barns that are 6 feet in diameter.

“They’re big dudes,” he said of the fans that blow air up to 40 feet away. “That’s where you want to be in the middle of the afternoon when it’s hot. It’s pretty nice under there. You get a good breeze.”

Fraze also reconfigured the water misters that hang above the cows in the barn, lowering the system about three feet so they can provide a more direct cooling impact for the cows.

The fans and misters are operated by thermostats and kick in once the temperature exceeds 76 degrees. Dairy farmers work long days and Fraze appreciates the helping hand technology provides.

“We don’t have to think about getting up at 3 in the morning and turning the fans on or off,” Fraze said. While human interaction with the animals is still paramount, technology allows farmers to be more efficient. “They’re pretty much trouble-free,” Fraze said.

These enhancements have made a difference but Fraze is far from done. He plans to purchase additional Cyclone fans and lower the temperature even more.

“You can’t put a dollar figure on how much comfort you provide your cows,” Fraze said. “We really spared no expense in putting up fans and I want to put up more.” 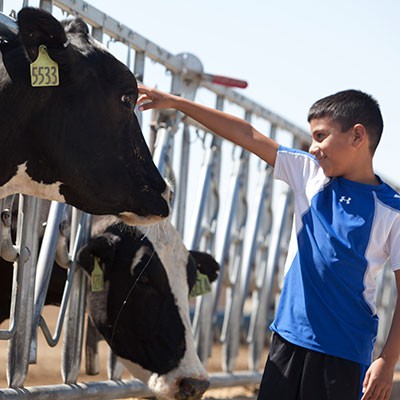