How These Dairy Farmers Take a Long View on Sustainability | U.S. Dairy

Being sustainable is important to the dairy community. Not just to farmers but to companies that produce wholesome dairy foods that nourish people around the globe.

In 2012, the Innovation Center for U.S. Dairy unveiled the first class of winners of the U.S. Dairy Sustainability Awards. The program highlights industry efforts to deliver outstanding benefits to businesses, communities and the environment. More than 50 U.S. dairy farms, businesses and collaborative partnerships have been recognized as environmental leaders.

Here are updates on how three alumni winners are faring today with the programs that earned them recognition.

Small Solution Has Big Impact on Cow Comfort
Minnesota dairy farmer Suzanne Vold cannot stand the thought of getting stung by a bug.

“Some people have a snake phobia,” she said. “I’m sort of a bee-phobia/wasp-phobia person.”

That’s why she was adamantly opposed to the idea of introducing a wasp population to the dairy farm as a way of controlling flies. 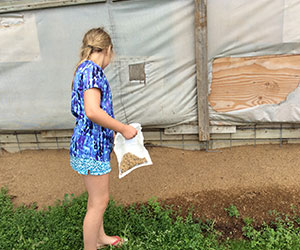 Spreading wasp larvae on the farm.

“I was the naysayer,” she said. “I said no way. We are not going to have hives all over the place.”

But she soon learned Dorrich Dairy in Glenwood wouldn’t be swarming with wasps aiming their stingers her way. The wasps — which Vold says are about the size of a pencil tip — are a natural biological predator to flies. They have nearly eliminated the pest’s population at Dorrich Dairy, making it more comfortable for their cows.

“I’ll use a mosquito as an example,” she says. “When a mosquito bites you, it’s annoying, right? Think about that for cows with flies. We want to make sure our cows are as comfortable as possible, as calm as possible, and we want to get rid of all of those little annoyances.”

Vold says they purchase wasp eggs from a company each week. The eggs are placed in warm, wet areas of the dairy that are prone to fly larvae. Once hatched, the wasps devour the larvae. Because of Minnesota’s cold temperatures, the wasps are only needed May through September. After the first or second frost, the flies — as well as most members of the entomological world — are no longer visible.

In addition to improving cow comfort, Vold said the dairy has reduced its synthetic pesticide costs by 85 percent. The farm also use an organic repellent spray around the barn that further reduces the fly population.

After winning their sustainability award in 2015, Vold said they were contacted by farmers who wanted to learn more. Their story also caught the attention of a local TV reporter who came to the farm. Once there, he asked Vold where he could film footage of flies. But that was the very point of the story – there were no flies to be filmed. Vold finally saw a few trapped behind a screen covering a window. The reporter got his shot.

“I thought that was a great success story, that he wanted to film flies on the farm and he couldn’t find any, except those that were trapped in the window,” she said.

Leading the Way to a Sustainable Future
Seven years ago isn’t exactly ancient history but Vermont dairy farmer Marie Audet gives that impression when she talks about how much her farm has changed since her award in 2012.

“We don’t farm the way we did back then,” she said. “If there’s one thing consumers don’t realize it’s how much we’re evolving. Like the rest of society is evolving, so are we. The more knowledge we have, the more we do. The more science that is available, the more we can adjust and make changes.”

One change Blue Spruce Farm made is to stop using a style of plow known as a moldboard to prepare the land for a new crop. The plow turns over the soil and is effective at killing weeds. But Audet said the plow’s intense characteristic can create erosion, which leads to nutrient loss and a lesser quality soil. The Bridport-based farm invested in a new machine that instead injects seeds into the soil.

Another practice that Blue Spruce is known for and led to its 2012 honor is being the pioneering dairy of the Central Vermont Public Service’s Cow Power program. Electricity is created from manure fed into the farm’s methane digester along with those on two neighboring dairies. The three dairies provide one-third of the power for the local substation that serves the community of 2,600. 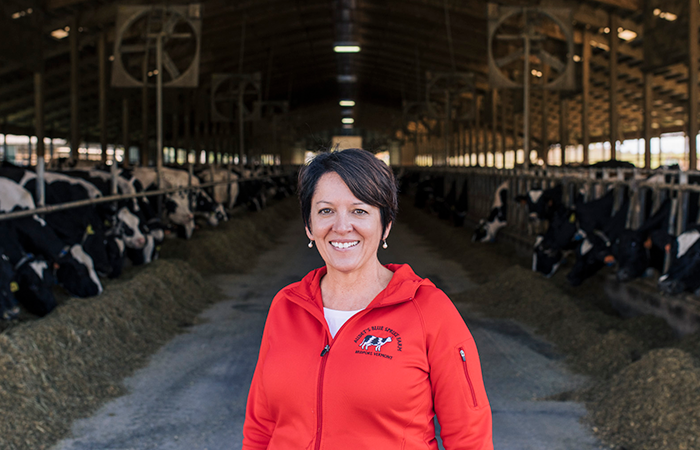 Marie Audet of Blue Spruce Farm in Bridport, Vt. Her farm is also pictured at the very top of this page.

Audet describes the digester process as a complete cycle: The farm grows crops using solar energy and recycled water and cow manure. The crops are fed to the cows so they can provide milk. Those crops gain value in the form of manure that is placed into the digester. Methane gas is then captured from the digester to make renewable electricity. And there is an additional benefit from the digester: a byproduct similar to peat moss that the farm uses as clean, fluffy bedding for the cows.

Audet sees dairies as being an important solution to a sustainable future, on her farm and beyond.

Creating a Path for the Next Generation
Matt Freund remembers a 1997 brainstorm session designed to find creative ways to make use of cow manure.

Specifically, he and the others seated around the table were looking to identify a second life for the manure that already had gone through the methane digester at his East Canaan, Connecticut, dairy farm, Freund’s Farm. The digester produces heat energy used in the dairy operation and farmhouse, but it left behind a nutrient-rich byproduct that some farmers used for composting. But the composting market was competitive, so Freund needed other ideas.

That’s when someone said, “I think you should make a flowerpot out of it.”

He formed a rough idea and began making calls. He eventually connected with someone who could help take his idea to reality.

Today, CowPots is a successful side business to milking cows. The biodegradable containers are a substitute for plastic pots for plants and flowers sold in mom-and-pop nurseries and other stores in the Northeast. They are a hit with home gardeners and professional landscapers. 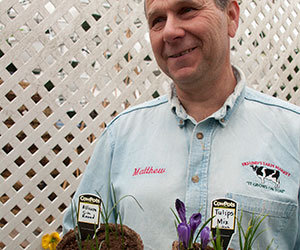 Matt Freund with his Cow Pots

“It really does all of the things you want,” Freund said. “You’re replacing plastics, you’re getting a mature plant faster — it has all of the characteristics of a winning situation.”

Now, Freund and his family are patiently waiting for a bigger breakthrough moment. The concept has drawn national attention. He’s been interviewed by major media outlets, including the Today show and Larry King show, and he appeared on Dirty Jobs with Mike Rowe. But he’s looking to take CowPots to a grander stage where they can be mass produced and distributed to more places.

“We know the market is there,” Freund said. “There are billions of plastic pots in the U.S. every year. We only need a small percentage of that to move a lot of material off of the farms.

“We are right there, we’re right at the cusp. We’re looking for consulting to help us make the next jump.”

Wherever that leads, Freund is proud of continuing his family’s longtime commitment to sustainable farm practices.

“Sustainability started with my dad; it’s been built into our genes,” he said. “Sustainability was always a top priority and we try to carry that forth with the next generation — my brother Ben and myself. And then my kids made it more of a priority for them to come back to the farm.

“We did things when they were growing up with composting — looking at manure disposal and CowPots as something we could better ourselves with. It just ballooned from there and now my kids don’t know any other way to farm.”

Ask a Dairy Farmer: What Are You Doing for the Environment?

Sustainability Is More Than a Buzzword for This Vermont Dairy