Students Learn Where Their Dairy Food Comes From

Katie B. attends high school in Philadelphia and feels a million miles away from agriculture and the true source of the food she enjoys.

“I’m a city girl,” she acknowledges. “There aren’t any farms around me.”

Yet she seems very much at home walking the grounds of an Ohio dairy farm in mid-July. She marvels at the black-and-white Holstein cows and leans in to give a few a scratches.

“Whenever I get the chance to come to a farm and strap on boots and get dirty and see the animals, I get so excited,” she says. “It never gets old.”

Katie was in Ohio for an annual student ambassador summit of the Fuel Up to Play 60 program. Fuel Up to Play 60 was created 10 years ago by America’s dairy farm families and the National Football League to improve students’ health and wellness through better nutrition and increased physical activity. It is in more than 73,000 schools and has impacted millions of students.

Over the decade, Fuel Up to Play 60 helped close the gap between the farm and today’s consumers, who can be three to four generations removed from food production. Many dairy farmers and other experts shared insights at the summit to help grow attendees’ knowledge of agriculture. To that end, two Ohio dairy farms hosted busloads of students and teachers so they could see firsthand what it takes to get milk from the farm to their schools.

The cows and the farmers’ care for them were a big hit. 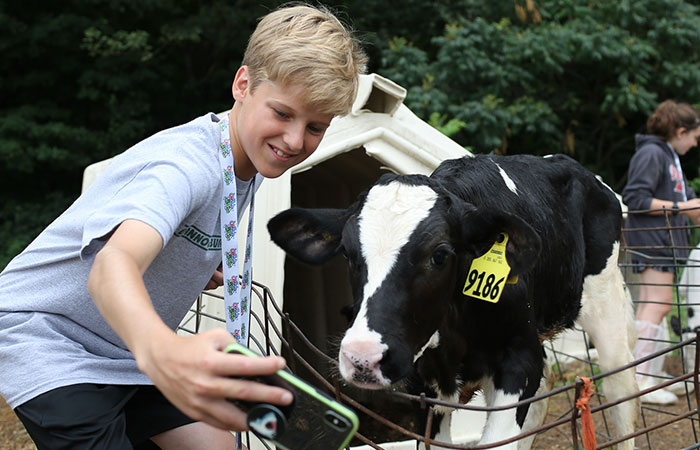 “I’m beyond baffled at how amazing they treat these animals,” Katie said. “I never realized how much goes into running a place this big. They wake up at 4 in the morning, and they don’t go to bed until late, late at night. And it’s all because of these cows and how much they care and how appreciative they are of them. I don’t think I’ve ever met a group of more passionate people.”

That passion isn’t lost on Kayla B., a ninth grader from Florida. She, too, has visited a dairy before and marvels at farmers’ commitment to sustainable practices. That’s a sweet spot for her.

“I love that they care so much and want their farms to be the best they can be,” Kayla said. “I have seen in some cases where they use manure to make energy, and that’s something I am definitely passionate about. They’re able to use manure in constructive ways to recycle it. A lot of people don’t know that, and I feel that is something that needs to be educated about.”

Fuel Up to Play 60 allows students such as Katie and Kayla to lead change at their schools, whether by growing a garden, forming exercise programs or working with cafeteria managers to offer healthier foods like smoothies. The options are up to each school’s needs and imagination.

More than 260 Fuel Up to Play 60 student ambassadors and 124 teachers representing 45 states gathered for the summit in Cleveland in July. Its goal was to exchange ideas and become further inspired about Fuel Up to Play 60. 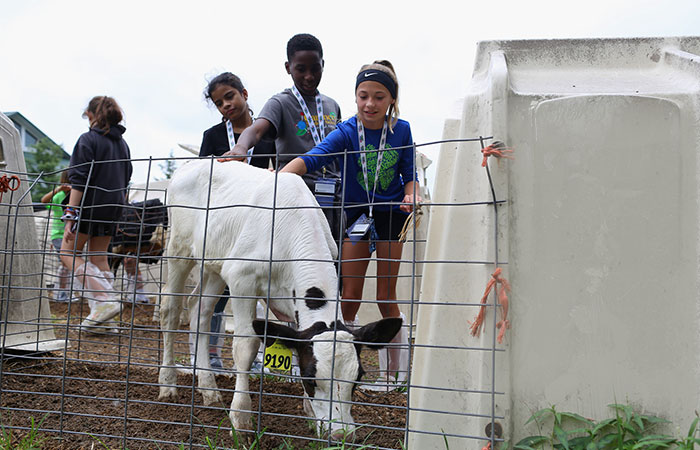 The group heard from inspirational voices, such as professional boxer Clarissa Shields and various NFL players. The summit also featured a charitable aspect. Students and teachers, along with dairy industry employees and Cleveland Browns players, volunteered their time at 10 food banks. Students are especially at risk of going hungry in the summer when more than 18 million children lose access to school meals.

Hugh Brockway, who teaches physical education at a Virginia elementary school, has the unique perspective of growing up on a New York dairy his family no longer operates. He serves as his school’s Fuel Up to Play 60 adviser and is thrilled at the program’s dairy connection.

His school has used Fuel Up to Play 60 funding to enhance breakfast offerings as well as plant nine garden beds. Students harvest the vegetables and serve them as healthy snacks in the cafeteria. He sees an enhanced awareness of nutrition and exercise on campus.

“When (Fuel Up to Play 60) first came across my desk, I said I was born to lead this program,” Brockway said. “Growing up on a dairy farm and then heading off to college and becoming a PE teacher and now leading this program brought everything together.

“Fuel Up to Play 60 has made me a better teacher, a better parent, a better colleague. I hear from parents who have said, ‘I can’t believe the fun things you are doing that’s created my kids wanting to eat healthier.’ It’s pretty cool to hear that. I can’t say enough fantastic things about the program.” 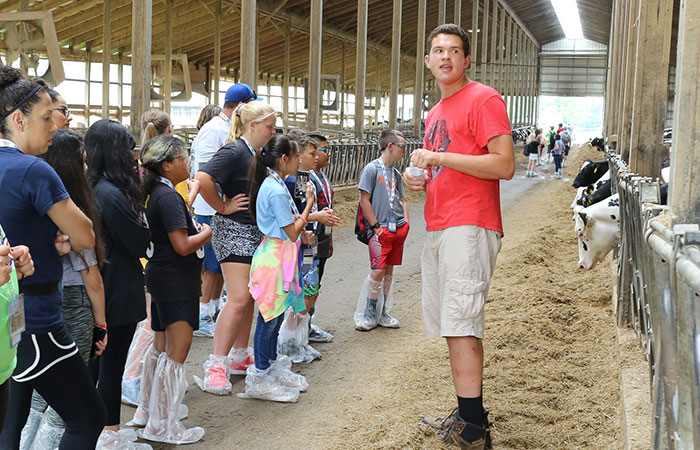 Katie is among the many students who feel it has helped her grow leadership skills and brought positive change to her school. The cafeteria menu no longer serves an abundance of fried foods, and kids have access to healthy smoothies in the morning.

“My favorite thing about the program is how much they value the student voice,” she said. “They’re listening to what we have to say and implementing it into school life. We’re realizing kids have an ability to make a difference in the world and their communities now rather than just when they get older.”

And while she may be a “city girl,” Katie’s appreciation of farmers runs deep.

“I don’t think I have the words to thank the dairy farmers,” she said. “They are the backbone of this program and for everything we stand for. I’ve never seen such a group of people more caring about a program and more caring about kids and health and wellness. I think it’s absolutely amazing the difference they’re trying to make and the steps they’re taking to have a healthier community.

“They are passionate, not just about their cows but every single thing they do.”

Dairy as a Driver of the Sustainable Development Goals

Introducing Children to Cows: You Can Do It Too!

Honor the Harvest: From Farm to Table and Back Again