Don't Be Distracted From GENYOUth's Mission

My father-in-law is a former politician who used to hold two types of fundraisers. One was a basic pig roast that wasn’t too expensive and designed for one group of people. The other was held at a restaurant and he invested a little more money to appeal to another group.

I’m reminded of his latter strategy and the importance of adapting to different audiences each time I attend the annual GENYOUth Gala. It is a formal affair held in New York City that draws business leaders and famous athletes, as well as students and educators from across the country. It is a long, long way from our farms … and my father-in-law’s pig roast.

If you’re only into optics, then maybe this doesn’t pass the eye test for an organization that was founded by dairy farmers through our checkoff. But I encourage you to look much deeper, well past the glitz of the evening, and into the real mission of why we gather annually in such formality.

The gala is GENYOUth’s largest fundraiser of the year. It is underwritten through third-party sponsorships, table sales and in-person donations. After costs, this year’s gala netted $1.4 million that will go toward GENYOUth’s youth wellness programs, including the flagship program – Fuel Up to Play 60, which we founded in 2007 with the NFL to advance our school-based priorities. 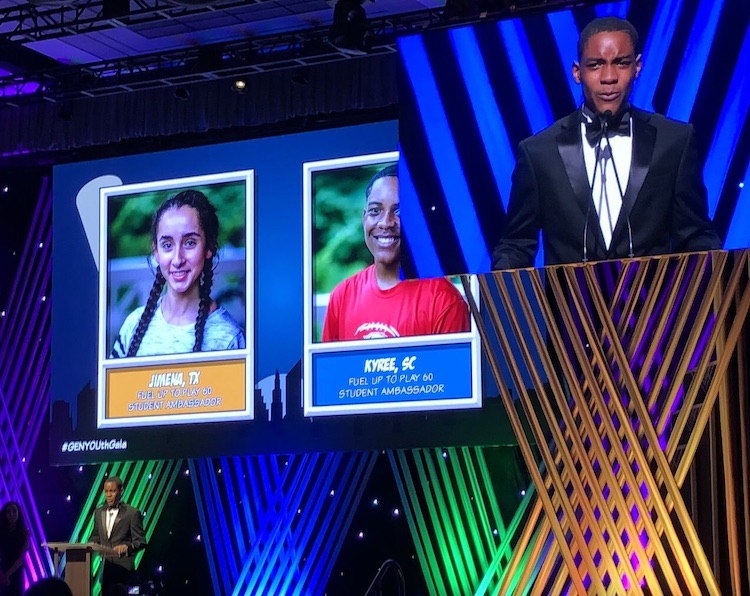 But, the gala does much more than this. It puts dairy farmers and our industry front and center with some of America’s most influential companies and leaders who we otherwise would never have a chance to meet. We talk so much about the ever-widening disconnection between consumers and our farms. How is it not beneficial for us to engage with CEOs and leaders of these companies who also don’t know us?

PepsiCo was honored during the gala for its funding of grab-n-go carts that increased access to more than 5 million school breakfast meals (which USDA requires milk to be served) as well as funding the translation of Fuel Up to Play 60 en Espanol.

Just how committed is PepsiCo to GENYOUth? During the gala, it announced a pledge of an additional $1 million to further grow school breakfast participation in high-need communities and to enhance the FUTP 60 en Espanol program and student ambassador network.

Like you, I want a bright future for our industry and much of that starts with growing our presence in schools. I believe in Fuel Up to Play 60. We grow access to dairy foods and Fuel Up to Play 60 funding has supported:

We also know through insights from Fuel Up to Play 60 schools that 14 million students are eating healthier and consuming vegetables, fruits, whole grains and dairy.

Fuel Up to Play 60 also puts a face on our farmers for students who don’t know us. I met two girls at last year’s Fuel Up to Play 60 student ambassador summit who will graduate this year. Both spoke about how they didn’t come from agriculture backgrounds but now want to pursue careers in our industry, thanks to their exposure to Fuel Up to Play 60. It’s wins such as this that make me proud that we have a program for students to hear our stories and learn about our mission as farmers to feed our world.

Which leads me back to GENYOUth. The funding this organization generates for our school priorities is crucial. There are so many areas we want to commit our checkoff dollars to, but the checkoff isn’t growing. This is what our checkoff strategy is all about – we work with powerful partners to extend our checkoff dollars. I could write volumes about what McDonald’s, Domino’s, Pizza Hut, Taco Bell and others have done to keep dairy front and center in a crowded food and beverage segment.

GENYOUth delivers school funding while allowing us to build relationships with major companies across our country. We are opening new doors and who can say where that will lead?

Anything that distracts from this true vision is missing the point.

If you want to talk about GENYOUth, I encourage you to reach out to me through talktomarilyn@dairy.org or leave a comment below.

If you’d like to join the Facebook conversation about the national dairy checkoff, ask to join the Dairy Checkoff Farmer Group.