Sometimes the questions I get asked about cows are pretty interesting- like do cows really like to taste the rainbow?

The answer is, YES!

This recent accident in Wisconsin that caused red Skittles to cover the road was from a truck delivering candies to become part of a cow ration/diet. This truckload of candy would otherwise be headed to a landfill.

The fact is that cows, both dairy and beef, can and like to eat a lot of feed stuffs that humans won't and can't digest. Candy, bakery items, canola meal, and spent grains from breweries are just a few examples of that. There's are literally tons and tons of other food and feed stuffs that we humans can't digest or aren't really fit for our consumption that would otherwise end up in a landfill. So instead, if the product is good enough and makes sense for the cows' diet then it is integrated into their feed ration.

On our farm the highest producing cows (our elite athletes) actually have a small amount of chocolate included in their protein mix (I like to think of it as their high energy granola). Nutritionists for cows determine the right amount and balance of these feed stuffs in the diets of the cows, based on their condition, health, production and even the weather. It's all about making sure they have the right diet to give them the energy and nutrition they need. Candy isn't used to "fatten" them up, it's used to round out their diet (citrus pulp is another great example!)

So while most dairy and beef cows aren't bellying up to a swanky candy bar they do sometimes get to taste a bit of the rainbow.

Want to learn more? Here are some answers to common questions:

Watch my friend Laura Daniels, a Wisconsin dairy farmer, explain why farmers may feed candy to their cows via Facebook Live: 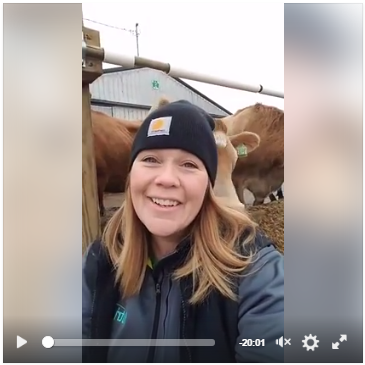