The top honor went to a cheese that highlights dairy’s growing global connectedness: Esquirrou (pronounced ehs-keer-oo). Beating out 3,402 entries for the top title, this hard sheep’s milk cheese was imported from France by Pennsylvania purveyor Savencia Cheese USA, who then submitted it to the contest.

“It’s an unexpected thrill, and I’m grateful for that,” said Silvain Diedrichs of Savencia Cheese USA to a crowd of several hundred cheese enthusiasts. “It’s a great honor to receive this award.” 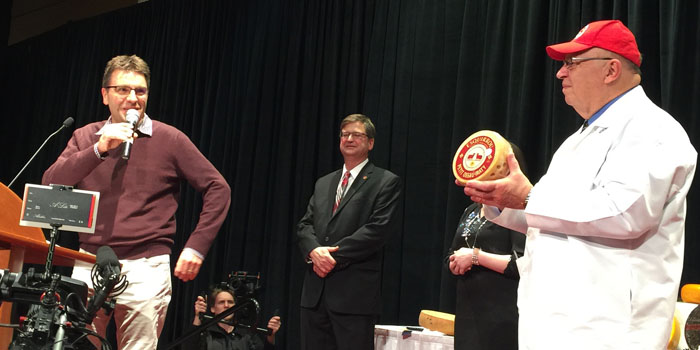 The World Championship Cheese Contest is the largest technical cheese, butter and yogurt competition in the world – a scale and diversity that creates exciting face-off possibilities, like a final round pitting a Wisconsin Cheddar against an Italian Gorgonzola.

Judges with years of cheese-grading experience determine what should rise through the ranks by examining: 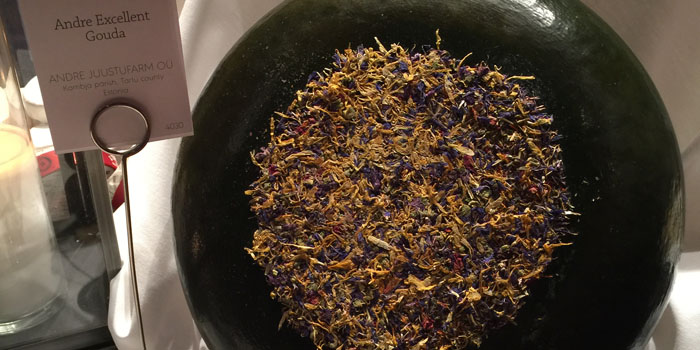 During one of the judging days, two judges—Dave Potter and Lloyd Metzger—worked their way through 60 different mild cheddars within the span of eight hours. (That’s a taste of cheddar every five minutes!) And yet they swallowed almost none of them.

“You just taste it, you don’t eat it,” confirmed Potter.

In their white lab coats and baseball caps, Potter and Metzger are among 56 judges who meticulously examine the products. Several judges wear red hats to signify their years of leadership and service. Called ‘red hats,’ these judges are the best-of-the-best cheese graders.

Judges come not only from the United States but from West Africa, Mexico, Switzerland and beyond. And they bring with them a deep expertise in the world of dairy products. Potter, for example, teaches at the university level and works for a manufacturing supply company.

In the first two days of the competition, the public can watch people like him at work. Riley Gascoyne and Brooke Grams, university students and self-identifying “cheese fans,” marveled at a judge who used a hammer on a wheel of cheese to listen for defects caused by unintended air bubbles.

It’s an art. It’s a science. But most importantly, it’s delicious! Though one cheese took home the top honor, at a competition hosting the best cheeses in the world, everyone’s a winner.